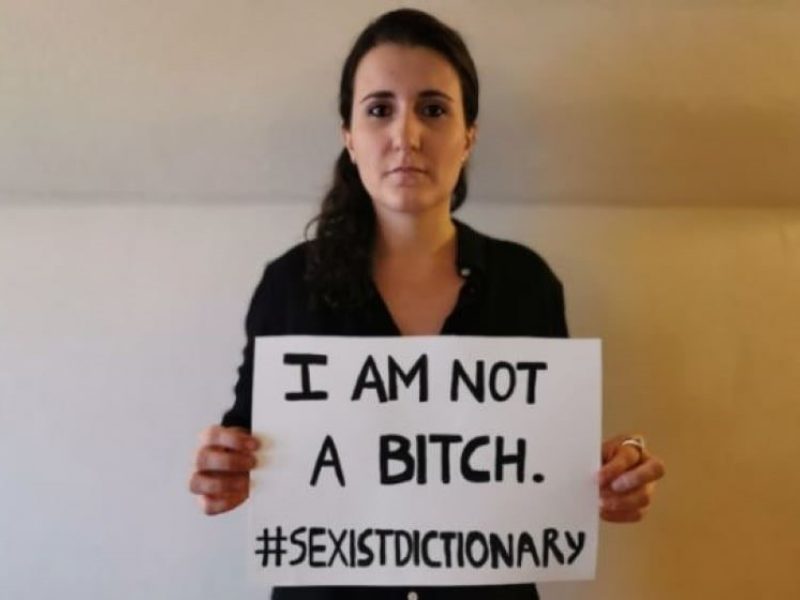 Even if English is less susceptible than Italian to be used in a sexist manner because it is an almost fully genderless language, some stereotypes can still be conveyed, as is shown in the following article by CBC Radio · Posted: Mar 05, 2020:

Examples and synonyms in online definition include 'maid,' 'wench' and 'bitch'

Women's rights advocates are calling on the Oxford Dictionary of English to change how it displays online results for the word 'woman.'

Maria Beatrice Giovanardi says the Oxford Dictionary of English results for "woman" are sexist — and at least 30,000 people agree with her.

The London-based marketing consultant and women's rights advocate has signed an open letter and launched an online petition calling on the publisher to address "completely unacceptable" language in the dictionary's online search results, including synonyms such as "wench" and "bitch."

The open letter — published in time for International Women's Day on March 8 — is signed by the leaders of several women's rights organizations, including the Women's Equality Party and the Women's Aid Federation of England. The associated petition had more than 32,000 signatures as of Thursday.

Oxford University Press, which publishes the dictionaries, says it's in the process of making changes to how it displays the definitions.

According to Giovanardi, the core of the problem isn't the definition itself, which simply reads: "An adult human female." Rather, it's the associated synonyms and illustrative phrases.

For example, looking up synonyms for "woman" on Lexico, an online dictionary powered by Oxford, yields examples like, "chick," "bint," "popsy," and "maid."

Under the online definition are example sentences like, "Don't be daft, woman!" and "God, woman. Will you just listen?"

In most cases, the problematic synonyms are labelled with descriptors like "archaic" or "derogatory."

The phrases and sentences, meanwhile, also include some positive or neutral examples, like "a woman doctor" and "woman of letters.", but Giovanardi says the derogatory examples are too prominent and prevalent.

What's more, because Oxford partners with tech companies like Google and Apple, it means people will often see the archaic terms right away and without context.

"It's an everyday use dictionary that has a different purpose, and that purpose is to show current use of the word."

Her petition calls on the dictionary to:

Oxford says listings are under review

In an emailed statement an Oxford University Press spokesperson says the publisher has reviewed the listings for "women" and "girls" and will make changes to improve the labelling of examples that are considered derogatory or dated.

"Our dictionaries reflect rather than dictate how language is used. This is driven solely by evidence of how real people use English in their daily lives. This independent editorial approach means that our dictionaries provide an accurate representation of language, even where it means recording senses and example uses of words that are offensive or derogatory, and which we wouldn't necessarily employ ourselves," the spokesperson said.

"In cases where words and uses may be considered offensive, they are clearly labelled as such. This helps our readers to understand the connotations of terms when looking them up and also acts as a lasting record of the way in which language evolves."

The updates will be "visible across various platforms in the next few weeks," the spokesperson said.

Giovanardi says she's "trying to be hopeful" about the response.

"In our opinion, labelling something offensive is not enough."