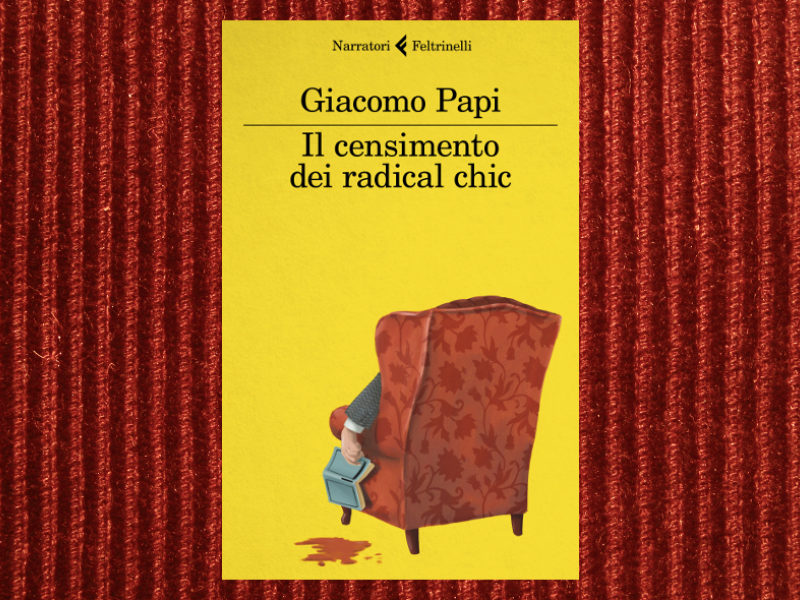 Some people say I can come across as a snob or a champagne-socialist at times. So, when my husband was reading this book, I was keen to pinch it as soon as he’d finished. I read it in no time because, despite technically being an essay, it’s written like a novel (or is it the other way round?), or rather a crime novel. I read it because I trust my husband’s tastes, so I didn’t need to look for any reviews beforehand.

Giacomo Papi’s writing style is very engaging because he moves from concepts and sharp observations on our world through the format of the crime novel. On the back cover this book is described as “funny”. I didn’t find it funny, but perhaps that’s because I was reading between the lines!

In a radically transformed – yet extremely familiar – Italy, complicated thoughts and words have become a sign of corruption and bad faith, and a trick through which the elite hoodwink the people. With nothing to hope for, normal citizens fly into fits of rage or engage in liberating rounds of applause, insults and beatings, in a never-ending witch-hunt: it’s illegal immigrants to start with, then gypsies, then people with friends in high places and homosexuals. Now it’s the turn of the intellectuals. The first to fall, lynched on his doorstep, is Professor Prospero, whose crime was to have quoted Spinoza on a talk show, for which he is duly reproached by the presenter: “This show is for families, people who break their backs during the day and have the right to relax and not feel inferior”. Seizing the opportunity presented by the Prof’s murder, the Minister of the Interior creates a National Register of Intellectuals and Champagne Socialists to conduct a census on people who “insist on considering themselves more intelligent than others”. The excuse is to protect them, but many refuse to fall for the trick and, in order to avoid being registered, they set about hiding their books and clearing their beloved cashmere pullovers from their wardrobes… In the meantime, Olivia, the Prof’s daughter - who has been living in London for years - returns for the funeral and finds a country she no longer understands. In a paradoxical and grotesque crescendo – that is desolatingly and lucidly hilarious –, Olivia investigates the circumstances that led to her father’s murder. Through her eyes, using a razor sharp literary mechanism of alienation, Giacomo Papi forces us to confront our smouldering present and the near future . With keen intelligence and laugh-out-loud moments. “This book does not contain any difficult words.” Supervisory Authority the Simplification of the Italian Language Decree Law, 17/6, n. 1728.

Reading this book, I realised that there are other people like me who believe our society is “going to pot”. I’m not referring to coronavirus (we still need to see its final toll on humanity), but rather in terms of our education, culture, analysis, thought, use of intelligence, freedom of thought and expression.

Below are three quotes which I have chosen from the book.

“You know, I’ve been thinking about it a lot. It’s not true that intellectuals serve no purpose.” “Really? What is it they offer?” “The make you feel less alone.” Olivia raised her eyebrows and looked perplexed. “What does loneliness have to do with anything?” Cesare gently gripped her forearm as they moved. “The things written in books prove that people are similar on the inside.”

I interpreted this as a neutral or even positive observation.

Reading books is a good way to use your time and they serve a huge variety of purposes: studying, learning, finding out more about things, but also for entertaining yourself or thinking. And that applies to all genres. I’m currently reading a lot of crime novels in my spare time but I’m picking up lots of things and I like to take note of passages that I consider to be “nuggets of wisdom”.

So I empathise with the characters and learn new things.

Even this statement... is positive. Especially the first part. Unfortunately, the second part is very sad. When I think about it, I agree there’s not much freedom of expression, listening and understanding.

Even in companies, my experience leads me to believe that people who try to apply the nice topics discussed in conferences and written in articles, tend to be marginalised, judged, criticised, viewed as a “talking cricket” (the Pinocchio character) and generally as someone who is annoying.

“...because you don’t need to think to eat. Maybe this also has something to do with hatred of intellectuals: culture cannot be consumed, whereas today something that has value needs to be devoured until it is destroyed or it disappears.

The book is perceptive in how it looks at politics and “strategies” although the word strategy is difficult to associate with some Italian politicians that bear a resemblance to the Minister of the Interior in the book.
The minister fell silent once again then sighed:
“Do you know why intellectuals are so important?”
The psychologist didn’t know, but he did know this was a rhetorical question that needed no response.
“And do you know why they’re dangerous?”
The psychologist had never thought they were.
The minister’s fluting voice began to wander around the room: “Because emotions are easy, elementary. If you learn the tricks, you can control emotions, but thoughts remain free, they go where they want and complicate things. Where reason is in command, statistics dies”.

This quote makes me shudder. It sounds like a reference to politics nowadays - or politics in general - which mobilises the masses by leveraging emotions.

There’s no doubt that emotions have a value and, for decades, in management practices emotions have become something to take advantage of... Hang on a second…

Does this mean that some CEOs might agree with the Minister’ words?